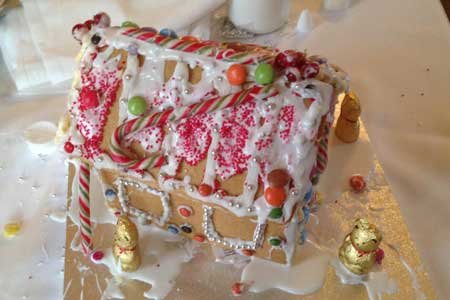 While working as a Luton Magician this Christmas I was lucky enough to visit several prestigious venues. One of my favourites was the Luton Hoo. Like Ragdale Hall, it doubles as a hotel and spa. The rooms are especially grand and cater for a wide variety of functions.

It describes itself as a Country Club and contains a “Grade II listed Robert Adam courtyard” which was originally part of the Mansion House. Facilities include an indoor pool, Spa, and dining. “Adams” is the appropirate name of The Brasserie. There is also the award-winning Wernher Restaurant.

On this occasion, I was working as a close-up magician for a Marriot Hotels Team Building Event. It is hard to know if I was working in Hertfordshire or Bedfordshire as the Hoo is on the border. It is close to Luton Airport and has easy access from London.

I was booked to perform table magic at a team building event followed by cabaret magic to finish the day off. Between my performances, delegates made and decorated Ginger Bread Houses. The MD asked me to appoint a winner from the four teams that took part. This turned out to be a little more challenging than I was expecting. It is not the sort of thing a Luton magician is usually asked but it seemed to be a reasonable request.

The standard varied and some groups’ creations were not unlike a collapsed shed. Like a house made of cards that someone had inadvertently sneezed on. Pictured above is the winner. On reflection, there may have been better candidates. However, I decided to send pictures to my five-year-old twins who made the final decision.

A house had completely fallen apart, another was held up by scones. These were immediately disqualified. From the other two, I picked what I thought was the most creative. Here is the photograph of the winner.

The Hoo is an excellent venue for events of all kinds and a beautiful setting for corporate magic. So, if you are looking for a Bedfordshire Magician give us a call.

Performances in the Area

While working as a Luton Magician this Christmas I was lucky enough to visit several prestigious venues. One…

This weekend I worked as a wedding magician at Woburn Abbey Sculpture Gallery for the second time. This…